Cheese comes in lots of different colours. The addition of colour to cheeses was historically quite common but in the last 30 years its use in cheesemaking has dramatically decreased.

Colour was added to cheese for cosmetic reasons, to give an appealing brilliant yellow colour.  There is no actual functional use in adding colouring.  The natural yellow colour in cow’s milk cheese comes from the carotene in the cream.  When the cheese is made the loss of the whey concentrates the carotene and leaves a colour darker than the original milk.

Cows are the only mammal with yellow milk.  Cheeses made from sheep, goat and buffalo milk are white.  These animals have an ability to synthesise the carotene in grass where a cow cannot do so.  Cows fed on dry feed during cold winters and housed in barns will also have whitish milk compared with cows that are free ranging, who will have more yellow colouring in their milk.  Breeds such as Jersey and Guernsey will have a more yellow milk than say a Friesian cow.

Annatto is the most common colour used by cheesemakers.  It is derived from the berry of the annatto tree (Bixa orellana) which grows in the rainforests of Central and South America.  The English Red Leicester cheese which is red in colour has approximately 20 – 30 times more annatto than a Cheddar cheese.

If annatto is to be used, it is added to the milk when the bacteria or starter culture is added but before the rennet. It is difficult to determine if a colour has been added just by looking at a cheese.  Most cheesemakers choose not to add annatto at any time, preferring to display the natural colours of the cheese. Some cheesemakers will add it all year round for uniformity and some add it only when the cheese milk becomes light in colour (eg when the dry winter feed produces pale coloured milk).

If making port wine cheese, there are a number of ways to get the port wine colour (and flavour) into the cheese.  The most common way is to spike some holes into the matured cheese, and soak the cheese in Port wine for several days.  However an unattractive brown earthy colour sometimes appears and not the rich red port colour.  This can be remedied by adding a small amount of beet dye to the port before the soaking begins.

Other ways to change colours of a cheese

In Sage Derby a green vegetable dye and dried sage herb is added to the cheese just before the curd is hooped.  The colour only adheres to the surface of the curd particles to give a mottled green effect.

The red, orange or brown and sometimes neutral colour from washed rind cheeses comes from the brevibacterium linens bacteria that is washed onto the surface of the cheese which breaks down the proteins into desired flavours.

Herbs, grape skins (marc) husk and alcohols such as wine, beer and spirits can be used to wash the outside of cheese.  Sometimes cheeses are soaked in these solutions for several days.  The solution is usually diluted with distilled water and a small percentage of salt added. 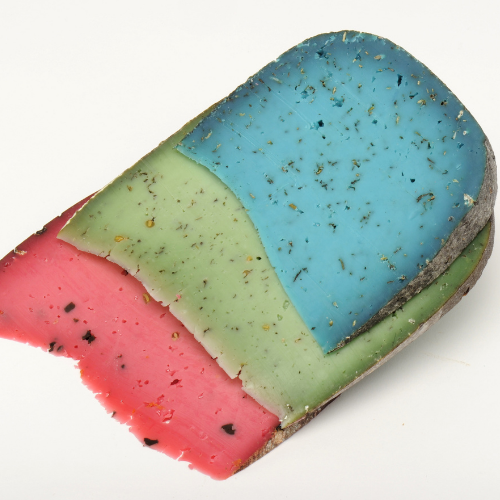