Three years ago, I attended a cheese making demonstration run by a New Zealand group, with the thought that this would be an interesting pastime, as there was very little if any audience participation I consequently forgot most of the demo.

Sadly, nothing eventuated until the last week of April 2016 when my friend, Robyn Bannister another Curd Nerd, invited me to join her at a Cheese Making Weekend at the New Town High School, which was run by Graeme Redhead from Cheesemakers, Queensland.

Wow – it was a full on hectic two days which covered 11 different milk products (cheeses, yoghurts, creams, butter, ricotta, halloumi etc.). I so enjoyed every single minute – and there began a most passionate and fulfilling experience that I have not encountered for many years. I now hunt down recipes from literally anywhere, read books on cheese making, down load articles, ask friends for their favs, visit exclusive top end cheese outlets etc. – whatever I can find with regards Cheese.

Some white moulds which include: Camembert, Brie, Brillat d’Savarin, Chaource and a white blue cross, Cambozola.

Red Cheshire, Linden with cumin seeds, and Cheddar with Port, Leerdammer (known commercially as Maasdam which is the generic name for this cheese) and Wensleydale are some of the harder cheeses I have made.

Edam, Reblochon, Morbier with black ash through the middle, Taleggio, Esrom, Bel Paese, Muenster (washing some of the cheeses in brine and others in wine but they are not ready as yet) are classed as Washed Rind Cheeses. They are washed every couple of days (for several months in some cases) with a brine solution. These cheeses have excellent melting qualities.

I came across a cheese, Belper Knolle, which was discovered by accident in Switzerland when some cheese balls were overlooked for several months in the back of a cheese cave.  Garlic is ground with Himalayan Pink Salt and added to the cheese paste then rolled in toasted black peppercorns. I have changed this slightly by rolling my cheese in crushed green, white, red and black peppercorns. These gems are exceedingly firm but when thinly sliced or grated as one would parmesan – the meal spins in to orbit!!!

Last but not least – Caciotta with saffron, an Italian cheese and of course Feta, Halloumi with mint and Ricotta.

I would freely admit that my cheese making is now an addiction and feel that I must make something at least fortnightly – if not weekly. I would like very much to develop a cheese of my own, so am currently working on this aspect. Every type of cheese that I have made has had a vastly different process – the only common denominators being rennet, starter cultures, calcium and milk!

I love the smell of the cheeses from start to finish and find the making thereof most therapeutic, a little scientific, challenging and relaxing, and the biggest plus is that the end product is extremely rewarding – especially when shared with friends over a glass of whatever – mine being bubbles!!!

I tried making Selles-sur-Cher with cow’s milk – the flavour of the paste was good but its consistency was that of very runny cream – apart from chilling it, which did help the lava flow, I feel perhaps it would have been better baked as one does Camembert – or drizzled over cooked potatoes etc.

One of my friend’s requests was Brillat d’Savarin – which I sourced and have made many times and it was one of the most popular at my Cheese Tasting which I held a couple of weeks ago along with 14 other cheeses. The Recipe for Brillat d’Savarin is as follows:

Rest for 1 hour while maintaining temperature

Morning: Salt top and sides and back to hoops

Afternoon: Turn cheese and salt the new top and sides and add back into the hoops

Remove cheese from hoops and dry off for 4 – 12 hours.

Store in ripening containers at 10C – 12C – removing whey and turning as per norm. 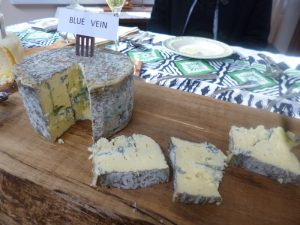