Cassie and Aron – Read about our most northerly cheese makers!

Cassie and Aaron Lobley live in remote Cape York at the top of Australia, approximately 12hrs drive north on a corrugated, dirt road from the nearest city, Cairns. Cassie works in Education and Aaron works for Rio Tinto as a refrigeration mechanic. They moved to Weipa, ten years ago with their daughter Makayla who was 1.5 and a newborn son, Xavier. Both Aaron and Cass lived in regional Australia as kids, Cass on a 48ft yacht in the Whitsundays area and Hervey Bay and Aaron in Roma and Charleville. They wanted the same adventurous, community upbringing for their own children when they transferred from Brisbane to Weipa not knowing anything about Cape York. But within the first week, they knew they were home. Over the next decade, they both fell in love with the life adventure that comes from living in remote Cape York. Friends become family. Weekends are spent hunting pigs, fishing, camping and riding motorbikes in untouched wilderness. When you wait 1-2 weeks for fruit and vegetables to arrive, mostly mouldy after being on the barge to get around to you for over a week, you begin to get creative with what you can make yourself. And that’s how it began…

Everyone loves cheese! It tastes even better with a piece of cured meat or a pickled onion and marinated sun-dried tomato. When you put all those things together with a glass of cold ale, fresh cider or wine and add in great company, mad tunes and a remote river system full of Barramundi, and a river Ferris wheel spit roast then you have the winning combination for LIFE!

Both Aaron and Cass love to cook together and experiment with new inventions based on a variety of designs they find online, Pinterest and in books. When wet season comes there’s plenty of time to bunker down, practice and research. Aaron has converted two double-door fridges, that he found at the local dump, into their main cure caves fit with digital thermostats and humidifiers. Under Cass’s request when she finds a new, unique cheese to try that requires temperatures not found in their tropical 38c weather, Aaron then converts their variety of car fridge options for her to age those wheels of cheese that need a few weeks. Cass tweaks the recipes for her cheeses to add her own signature flavour combinations such as her washed curd corona and lime, or her aged bourbon soaked cheese. She even has a rum n raisin jack ageing!

Keep in mind their weather ranges from 32-42c all year round with 80-95 humidity. It’s TROPICAL, to say the least. Growing mould is not a problem but growing the right mould and slowing the preserving/curing process is a concern that they are constantly experimenting with.

Cass and Aaron have been experimenting with cheese, charcuterie, distilling and brewing, preserving and other old-school techniques for years but only recently have they started stepping up as Artisans and creating their own unique flavours and techniques.

Cass has just published her first book “Making Australian Artisan Cheese at home” available from iTunes and they plan to write their next artisan book in the near further based
on their original salami and
sausage recipes.  They grow their own wild hogs and have bred a few pink pigs on a friend’s station which they turn into a variety of charcuterie cuts all aging in their fridges.

They distil their own spirits and liqueurs in their air still and have recently just made a fruit press from an old keg and old 5l glass demijohns. They crushed fresh apples and pears using a hydraulic press in their hand built keg setup. The cider then brews in the yeast in their cheese cave as well. They’re going to try berry cider next!

Cass and Aaron will be leaving their Cape York home at the end of this year to pursue their Artisan Homestead dream on their 25acre property in Tasmania called ‘Fork n Farm’.  They will be running courses and building accommodation on their farm from early next year.

The first cheese I ever made was a Farmhouse Cheddar and I added taco seasoning and chilli flakes. We liked it but saved a wedge and aged it 6 months and it tasted like a cheese stick you’d buy for kids at the shop. It was so super smooth and creamy with this smack of flavour kick at the end. I’d easily recommend this cheese to make and age the whole wheel!

The easiest cheese to make and most frequently made in our house would be a tie between halloumi (grilled with fresh lemon and mint on top) and creamy feta which we jar into quart ball jars and marinate with a variety of infusions then eat with everything from avocado smash to salads.

For first time cheese makers, I can’t recommend using the best quality of milk every time. I ship in fresh, organic full cream milk from about 12 hours’ drive from here and their organic, Jersey dollop milk will take your cheese to another level over no name brand milk from Woolies. Milk quality changes the flavour, colour and texture.

I love to make the Jameson Whiskey Cream but it is very time consuming. It’s so soft and flavoursome and you should probably just double the batch and make two, as soon as it’s brought out people want more!

My other favourite to make is Bourbon trempe au fromage or “Bourbon soaked cheese” which is French inspired and has a mild creamy texture in the middle. The bourbon helps it form a nice even rind and it’s super easy to make.

The best pasta carbonara I’ve ever made had a cup of our 18months aged Parmesan and a cup of 12-month aged Romano. There’s nothing like it in the world!

I also love to experiment with Jacks in a variety of ways. I add flavours and vary the ageing techniques and they never come out the same. I love to mix alcohol rubs with spices or just add the spices and herbs to the curds before pressing. If it tastes delicious in a cocktail, why wouldn’t it taste delicious in a cheese? Tequila and lime were sublime! The wheel lasted just a week of camping and brought out every day on demand. 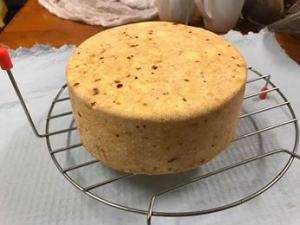