I wrote some notes for Graham about my cheesemaking experiences back in June 2015 and he recently asked me for an update on what I have been doing since then. It made me go back and look through my cheesemaking record books; I am a scientist by training, so have kept detailed records of every batch I have made and recently started my sixth 120-page A4 book!

Over the six years, I have made more than 200 batches of cheese. Whey ricotta was the most common cheese that I have made (more than 80 batches) because I cannot bear to throw away the whey (apart from feta whey which is too acid). Putting whey ricotta aside, over the 6 years I have made 10 different cheeses, between twice and 43 times, with camembert being the one I have made most often. Other cheeses with more than 10 batches include ashed mould-ripened chabichou, feta, and reblochon (a washed rind). I am always looking for improvements with each batch but have now refined several recipes to the point where I now make the same recipe each time.

Camembert is the top of the list of recipes I am no longer changing, but only after a long series of experiments starting in 2015 focussing on better white mould cover and on developing a stronger ‘French style’ aroma. The yeast Kluyveromyces lactis (Danisco KL71) is now a regular addition to my camemberts. It seems to reduce the time to fully moulded cheese by a couple of days and results in a better white mould cover. Since 2015 I also have tried a range of aroma cultures but have settled on Aroma-Prox PP 079 as my personal favourite with Aroma-Prox PR 035 a close second. Both of these cultures contain strains of Lactobacillus plantarumand Lactobacillus rhamnosus; if you can hold off eating the camembert for 6 – 8 weeks after wrapping, they add a lovely aroma and flavour to the cheese. Some of the other ones that I tried were less appealing. For example, Aroma-Prox EF 031 (Enterococcus faecium) added a definite ‘farmyard’ aroma that I did not take to, but some of the people at one of Graham’s Cheesemaking courses did like it. I guess it is a matter of personal taste. I would encourage you to try some of these aroma cultures as they can add an additional dimension to the flavour and aroma of your camemberts.

Reblochon is another cheese for which the recipe no longer changes. A friend gave me her recipe back in 2013, one that she, in turn, had been given by someone overseas. Now after 10 versions, I am happy that it is about as good as it is going to get. My recipe is posted on the Curds ‘n’ Whey Downunder Facebook page. The key challenge for me was to manage the development of the Brevibacterium linensso that the aroma was not overpoweringly strong. I now do the first five washes with a pale lemony-yellow, non-aggressive B. linensstrain, with the sixth and final wash being a bright orange and aggressive strain from Biena. The first five washes produce a lovely smooth pale yellow surface to the cheese but within a couple of weeks of the final wash, the bright orange strain takes hold to give a lovely colour and the ‘washed rind pong’, without it being overwhelming. I have included two photos to show the rind development.

Over the years, it has been the affinage aspect of cheesemaking that I find the most interesting, i.e. the art of maturing a cheese once made. For me, the duration of this process varies between ~10 days for an ashed mould-ripened chabichou to upwards of 3 months for a tomme or a natural-rind cheddar. There is a certain satisfaction in nurturing this ‘object’ for a few months, and during the process having relatives say things like ‘You’re not going to put that in your mouth, are you?’ only for them to line up to eat it once it is cut! I have included a couple of photos so you can see what I am talking about! The cheddar was especially delicious!

When I last wrote some notes for Graham’s ‘Cheesemaker in the Spotlight’ section in 2015, I said that blue was my biggest cheesemaking challenge.  It is still up there, but I think that I am finally making some progress.  I revisited blue cheese at one of Graham’s Brisbane courses in mid-2017 and the blue I made in early 2018 is getting closer to what I am after. It is now 3.5 months old and the photo shows good bluing through the cheese and a texture close to the crumbly texture I was after. The flavour is definitely on the strong side, which also is what I wanted. The key thing that I was missing in the past was getting the open texture that produced air spaces in the cheese so the blue mould had access to oxygen to grow. This latest cheese using Graham’s recipe seems to have achieved that as I was able to calculate with some basic algebra that the cheese was about 10% airspaces!

My biggest cheesemaking challenge is now to find enough time to make cheese!!!! As well, there is a whole family of cheeses that I have never considered attempting – cheese with eyes such as Emmental, Jarlsberg, etc.  Given that these have to be larger than I normally make so the eyes can form without breaking through the surface, I might just think about that for a while longer! 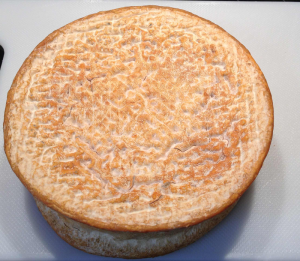