Phil – I began making cheese in earnest in May 2018

I began making cheese in earnest in May 2018. I have always had an interest in cheese but had rarely been inclined to be adventurous in the types of cheese I would try. I’ve come a long way since then! My first experience in the making of cheeses came by way of Graham Redhead’s 3-day Cheesemaking Workshopwhich I and my partner Christine attended in July 2006. Unfortunately, many things conspired to prevent me from any subsequent cheesemaking, not the least of which was time!

The first cheese I made alone was a Camembert. I was, as you’d expect, quite nervous about the process, however I found the experience to be rewarding and exciting. Much to my surprise and delight, the Camembert was everything I hoped for, nice earthy flavour and aroma with the paste just as I like it.

I have since made many batches of Camembert and to date have had only one failure. I tried to make a CamBlu by making my own modifications to my original Camembert recipe. Unfortunately, I had to feed that one to the bin monster! But I suppose you sometimes need to be philosophical when making cheese and just treat failures as a learning experience.

Following are some of the cheese I have made since May 2018. I try to make cheese a couple of times a month but lately I have been having issues with obtaining good quality milk. I think the drought may be a factor.

I think the most rewarding aspect of home cheesemaking is seeing the pleasure a well-made cheese gives others. That’s not to say I don’t enjoy eating it myself!

The biggest challenges I have had to date are:

The cheeses I most enjoy making is cheddar closely followed by Camembert. In general though, I much prefer to make hard cheese despite it usually having a long maturation time.

I have always had some form of store-bought cheese on hand, usually a Mainland brand Tasty Cheddar (aged 12 months) and a Perfect Italiano brand Parmesan. As a treat I also enjoy Mersey Valley brand Pickled Onion cheese. I also buy small amounts of the best quality style of cheese that I intend to make so as I have a “taste benchmark”.

The best advice I can give to anyone considering home cheesemaking is to try to attend a cheesemaking course first. It’s a great introduction and doesn’t generally require you to buy any equipment. I found Graham Redhead’s 2-day Cheesemaking Workshop invaluable and would recommend it to anyone wanting a great introduction to the process and a glimpse of the science behind it. Also, there are many Cheesemaking books available, but I would recommend that you try to buy a book that uses metric measures. Many books published for the American market use US or imperial measures and frankly it’s a pain to accurately make the conversion if you intend to follow any of the recipes.
Having said that, if you only intend to use the book as a knowledge source this won’t be an issue. A few of my favourite books are:

Following is a list of cheeses that I intend to make over the next 12 months or so. They include:

Add ¼ ‘drop’ spoon, or the tip of a skewer, of blue mould spores to approximately 100ml of milk warmed to 30° C. Stir in well and allow approximately 30 minutes for the spores to rehydrate. This is enough for 10 litres of milk so you will only use 80ml of this solution later in the process.

Warm 8 litres of non-homogenised full cream milk and 500ml of cream to 30° C. As usual, do not use thickened cream, it must be pure cream.

Add ¼ teaspoon (or 1.25ml) of Calcium Chloride diluted in ¼ of a cup non-chlorinated water to the milk

Add approximately 1 ‘Dash’ spoon of M235 (mesophile) and 1 x ‘Tad’ of MA315 (thermophile) starter to 8 litres of milk. Allow 5 minutes for rehydration and then stir in well using a gentle top to bottom motion.

Add approximately 80ml of the Blue Mould/Milk solution to the cheese milk and stir well for 1 minute. Discard the remaining 20ml.

Cover and allow to ripen for 30 minutes. Maintain temperature.

Add ¼ teaspoon of liquid Rennet diluted in ¼ of a cup of non-chlorinated water to the milk. Stir in a gentle top to bottom motion for 2 minutes. Leave milk still for 90 minutes. Maintain temperature.

Check for a “clean break”. If the curd is not firm enough, leave for a further 5 minutes and check again.

Line a large stainless steel colander with sanitised cheese cloth and place it into a large bowl. The size of the bowl needs to be such that it allows the curds to sit in the whey as it drains from the curd. Ladle or gently pour the curds and whey into the lined colander. Let the curds sit in the warm whey for 90 minutes. Try to maintain the temperature of the whey if possible.

Lift the curds out of the colander (still in the cheesecloth) and hang them to drain for a further 30 minutes.

Mill cheese
Place curds in a large sanitised bowl and roughly break up the curds into 12mm to 18mm chunks with fingers. Mix in 2 tablespoons of non-iodised salt.

Rest curds for 15 minutes, then invert the mould/s. Invert the cheese mould/s every 15 minutes for 2 Hours.

Let rest in mould overnight. Important: overnight temperature must be greater than 20 – 25°C (so keep in a warm place if it is a cool or cold night).

Invert the cheese several times a day over the next four days, and then remove from the mould. Carefully smooth the cheese surface with a pallet knife to prevent future cracking and undesirable mould growth.

On day six, using a sanitised rod with a 1.5 to 2mm diameter, carefully poke 25 to 30 holes from the top to the bottom of the cheese. This will allow air to enter the cheese and hence promote the internal growth of blue mould. Be careful not to make the holes too close to the edge of the cheese as it may cause cracking.

Age cheese at 10 to 12° C and 90% humidity. Turn the cheese several times a week. Consider using a ripening container to maintain humidity (as done with Camembert). Remember to regularly remove excess whey and any condensation, especially on the lid, to stop it dripping onto the cheese.

The cheese will develop a blue to blue green surface mould during aging. This usually commences after 7 to 10 days. As time progresses it will also develop a reddish-brown smear (slime). Scrape off the mould and smear once a week. Age cheese for 12 – 14 weeks. 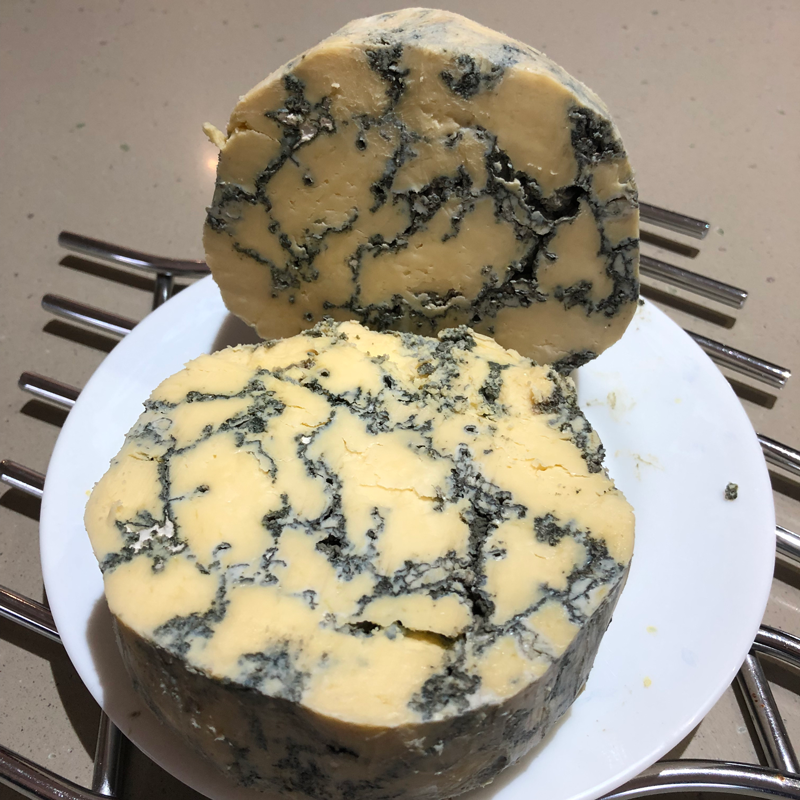