The white mould spores usually do not start growing instantly on the surface of the cheese.

When the cheese is salted on day two, there is an intense amount of salt in contact with the surface at this stage. The white mould spores will tolerate this salt, but only just, but for the white mould to grow, it has to wait until some of that salt has defused away from the surface to the inner paste of the cheese.

White mould will not grow with wet feet.  In the first 24 hours after salting, the camembert is not placed in a 95% humidity environment.  It usually sits on a rack in a covered container and is turned several times.  This will allow moisture to run off the surface of the cheese physically.  This cheese turning assists moisture removal and also allows fresh oxygen to the surface of the cheese. The cheeses at no time should be allowed to dry off or harden on the surface; white mould will not grow well on a harder or drier surface. It is good to hold the cheese at 14c to 16c for this 24 hours which favours the growth of the yeasts. You may have noticed that sometimes your cheese has a surface that is higher on the outside than the inside, sort of saucer-like in appearance. As moisture lands on the surface of the cheese, it will pool in the centre of the cheese instead of running off the cheese.  This wetness will restrict good mould growth.

When both the 24 hours of drying and Geo growth has been, the cheese needs to be held at 10 -14c and at 95% relative humidity and turned every 24 hours.  The turning is important for fresh oxygen and even mould growth.

When the white mould is fully developed, it is ready for wrapping.  Excessive white mould growth at this stage will cause a thick rind to develop.  For best results, use professional cheese wrap. I know baking paper and foil etc. is cheaper, but professional wraps help regulated moisture between the surface of the cheese and the wrap. They are better at keeping the white mould healthy and white.  As we said earlier, white mould does not like wet feet. You may have taken your camembert out of a ripening container at 10c.  This cheese is cold, and when left on the bench waiting to be wrapped, condensation will quickly form on the surface of the cheese.  This is particularly important on hot, humid summer days. This wetness will then be trapped under the wrapper, and it will kill the mould (and make the cheese really smell) during the upcoming maturation.

Then finally, when you have now wrapped your cheese.  It needs to be held at 7C or similar. 10 to 14c is to warm and gives higher proteolysis and less lipolysis.  You get more and better flavour if the lipolysis is allowed to develop. BUT the container the cheese is held in needs to be completely dry, so no condensation in the container and it needs to have a lid.  The domestic fridge is evaporative and even at four weeks in this sort of fridge will gradually dry the cheese out.  A dry cheese will not ripen sufficiently. 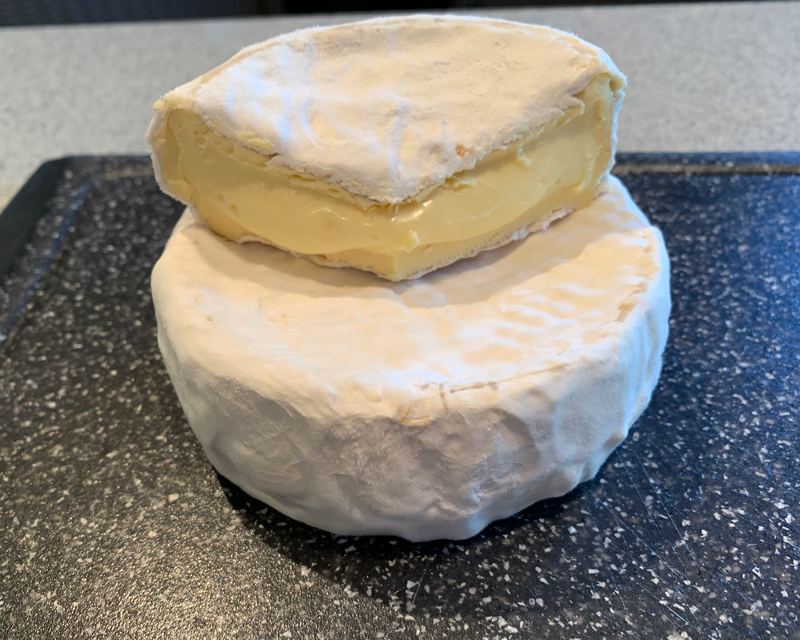